"As One Devil to Another" 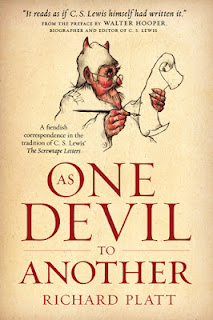 When The Screwtape Letters first began appearing in The Guardian, a now-defunct Anglican newspaper, C. S. Lewis was approached by an Oxford undergraduate who asked: “How many letters are there to be in the end?”

Lewis’ response was quick and to the point: “Thirty-one. Something diabolical for each day of the month.”

Now, on the seventieth anniversary of the publication of The Screwtape Letters in book form, thirty-one additional, diabolical letters are about to appear. Sadly, these are not lost letters from Screwtape to Wormwood, penned by C. S. Lewis. However, they are, perhaps, the next best. Walter Hooper, Lewis’ secretary for a brief period in 1963, says of the book, As One Devil to Another, “It reads as if C. S. Lewis himself had written it.” As much as I admire and trust Walter Hooper, I could hardly believe such praise until I read this collection of letters from Slashreap to Scardagger for myself.

This is indeed a collection of letters, not emails. One might have expected the latter in a book that purports to be an updated Screwtape, but apparently, the devils have not been “dumbed down” to the extent that humans have. The author, or should we say, translator or editor, of this correspondence, Richard Platt, writes with the same elegance, felicity and sarcastic wit that Lewis did seventy years ago. In addition, Platt reveals a theological sagacity and psychological acumen that almost matches Lewis’ own. I found myself, by turns, chuckling at the humor laced throughout this demonic correspondence, but then, the next moment, moved by the depth of spiritual insight and application to my own life.

As One Devil to Another reads almost like a great Whodunit; the author keeps his reader guessing until the very end about what will happen to both the beloved human characters and the delightfully hateful devilish characters in this story. Along the way, the content of these letters illuminate both the everyday temptations that haven’t changed much since Lewis’ time, as well as the societal shifts since the mid-twentieth century that have introduced new quirks to the devil’s game. The result of reading this slim volume is not mere entertainment. On the contrary, the reader is reminded of two of the most important spiritual principles in the universe: that individual souls form the battleground for cosmic forces, and that each soul matters to God, or the “Adversary” as Slashreap and his cohorts like to call him.

In short, if you enjoyed and benefitted spiritually from reading The Screwtape Letters, you will have a similar experience reading these thirty-one, artfully-crafted spiritual nuggets, even if you do have to turn the book upside-down to gain the nourishment provided.

To learn more about the book and/or to purchase, click here:

As One Devil to Another: A Fiendish Correspondence in the Tradition of C. S. Lewis' The Screwtape Letters