Why should we study The Apostles' Creed? 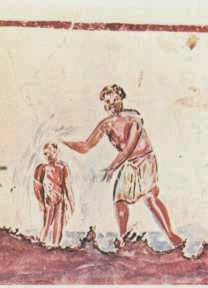 The word "creed" comes from the Latin "credo" which means "I believe." The Apostle Paul tells us of a great reward promised to those who confess their faith. In Romans 10:9 he writes, "That if you confess with your mouth, 'Jesus is Lord,' and believe in your heart that God raised him from the dead, you will be saved."

"Jesus is Lord" was probably the first creedal statement of the early Christian community. Confessions such as this simple one were often declared at the time of baptism. Williston Walker explains in The History of the Christian Church....


By the middle of the second century, however, the baptismal confession was triadic in shape. Candidates for baptism were asked three questions as they stood in the water, to each of which they replied "I believe"; and with these three affirmations and the washings which accompanied them, the candidates were understood to be baptised "in the name of the Father and of the Son and of the Holy Spirit." The baptismal confession, then, was the basis of an individual's membership in the community and, in consequence, the most fundamental expression of the community's self-understanding. We have a sample of such an "interrogatory" baptismal confession in the well-known formula of Hippolytus, which reflects the practice of the Roman church in the last decades of the second century.

Such creeds were used as a basis and outline for pre baptismal instruction and are the direct ancestors of the so-called Apostles' Creed as well as of the creed commonly referred to as the "Nicene." (pp. 72-73)

The Apostles' Creed provides an excellent, brief summary of the Christian faith. It gets at the essence of what Christians have believed for almost two thousand years. When we believe and confess the words of this Creed we are standing as one with our brothers and sisters of the Early Church and the Church down through the centuries, all over the world. Studying this Creed and the biblical basis for it helps us to send our roots deep into the core doctrines of the Church and helps us to articulate what we believe today.