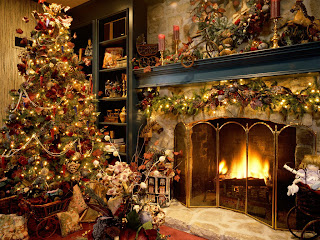 "I keep thinking about the Christmas scene that Anthony arranged under the altar. This probably is the most meaningful "crib" I have ever seen. Three small woodcarved figures made in India: a poor woman, a poor man, and a small child between them. The carving is simple, nearly primitive. No eyes, no ears, no mouths, just the contours of the faces. The figures are smaller than a human hand - nearly too small to attract attention at all.

"But then - a beam of light shines on the three figures and projects large shadows on the wall of the sanctuary. That says it all. The light thrown on the smallness of Mary, Joseph, and the Child projects them as large, hopeful shadows against the walls of our life and our world.

"While looking at the intimate scene we already see the first outlines of the majesty and glory they represent. While witnessing the most human of human events, I see the majesty of God appearing on the horizon of my existence. While being moved by the gentleness of these three people, I am already awed by the immense greatness of God's love appearing in my world. Without the radiant beam of light shining into the darkness there is little to be seen. I might just pass by these three simple people and continue to walk in darkness. But everything changes with the light."