Outline of "The Hidden Story of Narnia" 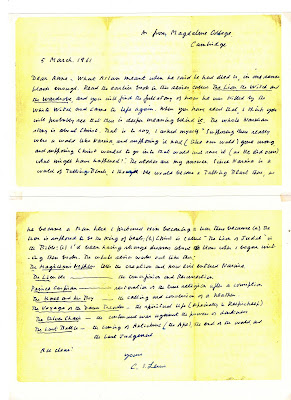 The outline of my new book, The Hidden Story of Narnia, is based upon a letter that C. S. Lewis wrote to a girl named Anne in 1961. In the letter (pictured above) Lewis wrote:

"The whole Narnian story is about Christ. That is to say, I asked myself 'Supposing there really were a world like Narnia and supposing it had (like our world) gone wrong and supposing Christ wanted to go into that world and save it (as He did ours) what might have happened?' The stories are my answer. Since Narnia is a world of Talking Beasts I thought he would become a Talking Beast there, as he became a Man here. I pictured Him becoming a lion there because (a.) the lion is supposed to be the King of beasts: (b.) Christ is called 'The Lion of Judah' in the Bible: (c.) I'd been having strange dreams about lions when I began writing the books. The whole series works out like this:

The Magician's Nephew tells the creation and how evil entered Narnia.

Prince Caspian__________ restoration of the true religion after a corruption

The Horse and his Boy ________ the calling and conversion of a heathen.

The Voyage of the Dawn Treader_the spiritual life (especially in Reepicheep)

The Silver Chair__the continued war against the powers of darkness

The Last Battle__the coming of Antichrist (the Ape), the end of the world and the Last Judgement."

A couple of weeks ago, while I was working on the galley proofs for my new book, I decided to try to find Anne. In a matter of days I had an e-mail from her. I asked her if she would mind reading The Hidden Story of Narnia and offering an endorsement if she liked it. She very graciously responded in the affirmative to my request. Within another day she wrote to me again to say that she had read the first few chapters and thought it was "brilliant!" She said, "I wish I had written it myself!"

The end result is that Anne has now written a lovely Preface to The Hidden Story of Narnia. But if you want to read that you will just have to order the book. It is available for pre-order now from my web site (http://www.willvaus.com/) and should be in print in early April.

Here is a photo of Anne when she was eleven years old, just a few months after she received her letter from C. S. Lewis.... 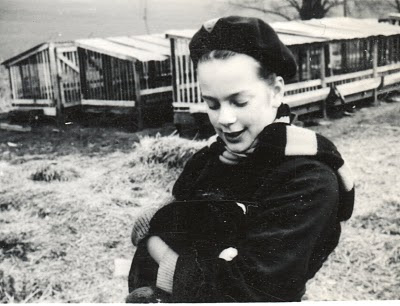 And here is the envelope in which she received her letter from C. S. Lewis. According to Douglas Gresham the handwriting on the envelope is that of Lewis' brother, Warnie.... 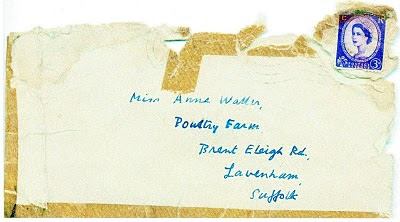